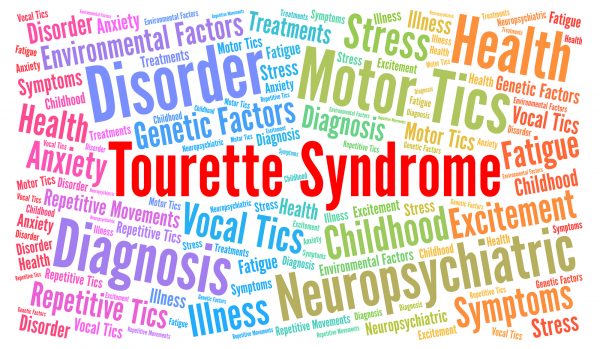 As a parent watching your child suffer with Tourettes is heartbreaking at times. There is no specialist in Tourettes so getting a diagnosis is really hard. We spent 8 years being passed from one person to the next with no help. Watching our son deteriorate from age 6 has been one of the hardest things as a parent.

What most people think is Tourettes isn’t. The media portrays Tourettes as funny movements from the body and swearing. In actual fact only 10% of people with Tourettes swear, it is a very debilitating condition for lots. There is the constant pain that repetitive tics cause; these may not always be visible to outsiders. The leg tics which mean you can drop to the floor at any time without warning, or your legs shake so bad it’s impossible to walk so have to use a wheelchair. These tics can last hours, days, weeks, months and for my son now cause him to have leg pain most of the time.

He was a very active, sporty boy at one time and really good at running, but due to leg tics he’s no longer able to play sports like he once did or run fast or even ride his bike far without causing him pain. My son is nearly 17 but I can’t leave him to do what most 16/17 year olds would because of impulsive tics. These can be anything from hurting himself or doing unsafe things like touching a hot oven or flame, trying to hurt himself with a knife, stepping out in the road etc.

Tics can be so repetitive that this interferes with sleep which then has a knock on affect. Imagine watching your shy child miss out on so many things growing up because of the anixety of being out in public without your safe person; in fear of blurting something obscene out and that person taking offence to something you have no control over. Simple things for my son like using a pen can trigger tics where he would draw or write all over his work, himself or even dig the pen back and forth in his arm. He mainly uses a laptop in school.

When you’re a parent you want to be able to take pain and suffering away from your child and with Tourettes you can’t! All you can do is reassure them & comfort them.

We have 2 children and for our youngest he finds his brother having Tourettes especially hard. There’s a 7 year age gap but for the youngest his brother’s tics can mean ruining games, saying nasty or obscene things to him even when he’s upset. It can mean an impulsive slap or kick as you pass or when you sit next to them. It can be breaking his new toy or throwing it, it can be spoiling a special moment. It means not spending as much time together because before long tics take over and arguments start as the youngest struggles with it even though he knows he can’t help it. It still upsets him. THIS alone with both boys has been the hardest thing as parents to see. We have one child who has no control over his actions or words and one who struggles with what’s happening and has to put up with it to a certain extent.

Constantly explaining your child’s condition to people is very tiring. Even at school adults were the worst to understand it and made his life so much worse. The arrogance of people can be unreal; comments like “Oh I have Tourettes, I swear a lot” or “is he like that because of something he’s eaten?” Would these people make the same jokes or comments to someone with epilepsy or who were in a wheelchair? Would they tell someone in a wheelchair to get up and walk to the toilet and stop being lazy? I very much doubt it as that would be discrimination right? But it’s OK to tell our son to control it, to stop making noises or throwing thing.

I have spent many years in meetings, on calls with school, sending emails to either help my son or educate people, to fight for what he deserves or what’s right. I couldn’t get a job with more hours due to always being at school to pick him up, at a meeting or be at home to make sure he’s OK. My husband has watched me in tears on several occasions battling for what is right. It shouldn’t be that hard right? But it really is when it comes to Tourettes.

From the my son’s view: “Living with Tourettes can be annoying because it affects things I can do in my life. It can make family life very challenging; also my social life. It don’t like going out because of my Tourettes in fear of what I might say to people or gaining attention because of my tics. My tics can cause me pain which isn’t nice. Impulsive tics can be painful or I may lash out at someone else and I don’t want to. Most people with Tourette’s have other complexities like OCD, Anxiety disorder, ADHD and so on. I have severe OCD, anixety disorder and sensory disorder and I’m on the pathway for ASD, so living with all that plus Tourette’s makes daily life and simple things very challenging.
“I feel because I’m very shy I may come across as rude but I really struggle socially and I rely on my my mum & dad for support. I spend a lot of time on my own other than family which can be lonely.

“My tics make simple things like writing really hard. I also find sleeping hard and sometimes even make myself jump with my tics. I have tried medication, anti-psychotics for my Tourettes but have had some horrible side effects. These medications are really strong, I’ve also been on ones for my OCD but they didn’t help much and I felt worse. Imagine having to walk round in fear of what you might say and feeling like you need to say sorry? Going to a place where people don’t understand your condition so it makes you uncomfortable and more in yourself?

“On the plus side I have meet some really interesting people with Tourettes and made a lot of friends at the support groups we attend. It’s nice to know there is other people with the condition and I’m not alone.”